On the dull and cold morning of 29th January 2015, with few birds about, I was sat with the wife enjoying a nice bacon and brie baguette with a cappuccino in a local cafe before going to choose a new carpet when the phone rang with the claxon Nelly alert warning of an incoming Alkborough communication… The wife instantly knew that carpets were off for the day – Neil Drinkall was on the phone from Alkborough Flats and started his usual self questioning description of a good looking golden plover - ND is an excellent birder and has found Marsh Sand, Semi-palmated Sandpiper, Long-billed Dowitcher, two Lesser Yellowlegs, four Buff-breasted Sandpipers, two Broad-billed Sandpipers, two White-rumped Sandpipers, about 10 Pectoral Sandpipers and Whiskered Tern to name a few birds at Alkborough in the last eight years but he suffers from something of lack of self confidence and always questions his own observations to the extent that he can talk people out of going to see birds he has found. I nearly missed a Broad-billed Sandpiper in the spring when he talked me out of that, so his description of this bird and the fact that he had seen grey axillaries and a dusky underwing quickly saw me exit from the cafe and I was at Alkborough within 40 minutes.

Upon arrival, the bird in question was about 500m away at the back of a grass field that held about 3,000 Golden Plover and 2,500 Lapwing. ND showed me a digi-scoped picture on his camera and I immediately suggested Pacific, as he had been erring on the American side, but the yellow and buff tones to the bird and a recollection of the 1985 Fraisthorpe bird suggested Pacific Golden Plover to me. We then got onto the bird again and watched it but still at a similar distance for the next 30 minutes in which time I took several photos with a 500mm lens and 2x converter. Obviously the images were small but I was relieved to see that at least a few were in focus. In the time I was watching the bird it squatted once when the Goldies flew, and the next time when the flock was spooked and left the area, I did not see it get up and missed the underwing but ND had seen this well earlier when the bird had flushed alone before my arrival. At about 12:45 the whole flock took off and although 1600 Goldies returned the Pacific was not with them. Subsequent searching over several days revealed up to 2,500 Golden Plovers but the Pacific was not seen again.

It had an open faced look with pale buffy wash from the bill to the rear of the ear coverts and this extended down the upper breast, where it was faintly streaked darker, before ending on the lower breast where the belly and centre of the underparts were off white. There were a few broken black bars on the upper rear flanks and the undertail coverts were off white. The most striking feature of the bird, that allowed it to be picked up at a distance, was the head pattern with a pale yellow-tinged line over the base of the bill that extended back over the eye broadening behind the eye into a wide and bright supercilium that turned down the side of the head and continued to a point level with the bend of the wing. The dark eye stood out on the plain face. The pale ridge above the bill was sharply defined from the darker crown that appeared at the distance we were watching from to be a muddy brown and formed a fairly obvious capped effect. The mantle and scapulars were dark brown prominently spangled with gold feather fringes and notches and this contrasted markedly with the more grey-toned wing coverts, again the colour being formed by fringes and edges of darker brown feather bases. The tertials were dark brown with obvious yellowish notches along the edges and the primaries more blackish-brown. The legs were more blue-grey than those of the Golden Plovers. No call was heard.

ND saw the underwing as the bird took flight and described it as dusky with darker grey-toned axillaries.

We are not sure of the bird's age or sex. We speculated whether the bars on the rear flanks indicated early moult to summer or remnants of summer plumage from 2014, but no conclusion was reached.

Given our limited knowledge of the distinctions between American and Pacific Golden Plovers in winter, we consulted Julian Hough about the identification of our bird, sending the images that I had managed to collect. His comments were as follows. “By late October, American's are monochromatic, with the golden bloom all but worn off to the point they look like Grey Plovers. In late January, the yellowish tones to the mantle and the shape of the supercilium, down curling, are pro-Pacific. The actual buff-colour to the supercilium is probably diagnostic just on its own, and is never shown by American at this time of year, though in late August, super-fresh juvenile American's can have the supercilium buffy-tinged.

Additional images to those accompanying this article, and some video of the bird taken with an iPhone and Swarovski telescope can be found at:

The record was accepted by BBRC and published in the 2015 rarity report (BB 109 p.584). This was the fifth Lincolnshire record (involving six birds), all of which have been in the north of the county, but the first in winter. The previous records were as follows:

Up to 2015 (and excluding those not certainly either American or Pacific), there had been ninety records of Pacific Golden Plover in Britain, all of which were single birds apart from the two in Lincolnshire in 2002. The chart below (which omits records of a returning adult in the Outer Hebrides starting in April, October and February of successive years) shows their seasonal distribution, illustrating how rare they are in mid winter. It also draws attention to the domination of the records by adults, which makes one wonder how many juveniles are missed. 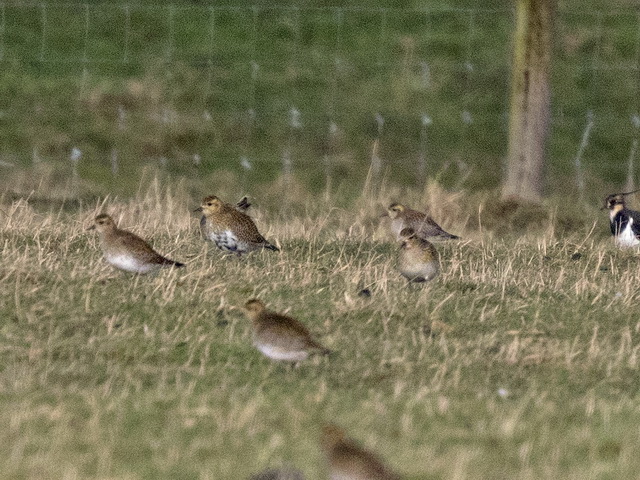 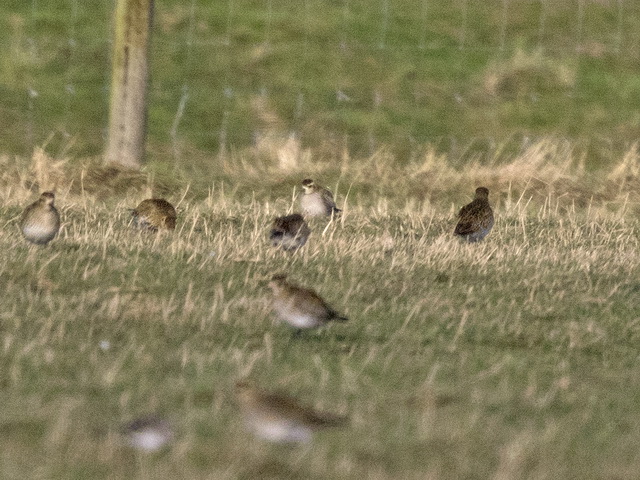